Renewed Special Request to Members of the
US Senate And House of Representatives
This pre-publication of Operation Twins II is a sequel to Operation Twins I published in March 2005 by the Willehalm Institute Press in Amsterdam. As was stated in this first volume, Operation Twins II and III were confiscated and translated from the original Serbian into English by the CIA in the eighties of the last century and have since then not been returned to its rightful owner, the author Slobodan Mitric. The updated material in this pre-publication is, apart from the appendices, based on notes from the lost version. Since Operation Twins was written for the general public and not just for the CIA, the publisher on behalf of the author hereby respectfully urges interested members of the US Senate and House of Representatives in Washington D.C. to see to it that this confiscated material is returned. By doing so, historians, researchers and interested readers can be given a better opportunity to judge for themselves the truth of the – at first sight outlandish appearing – claims the author has made in the first volume of his novel, namely that it  played a key role in ending the atomic weapons and space race in the cold war between the USSR and the USA and that thereby Operation Twins did indeed change the course of history. 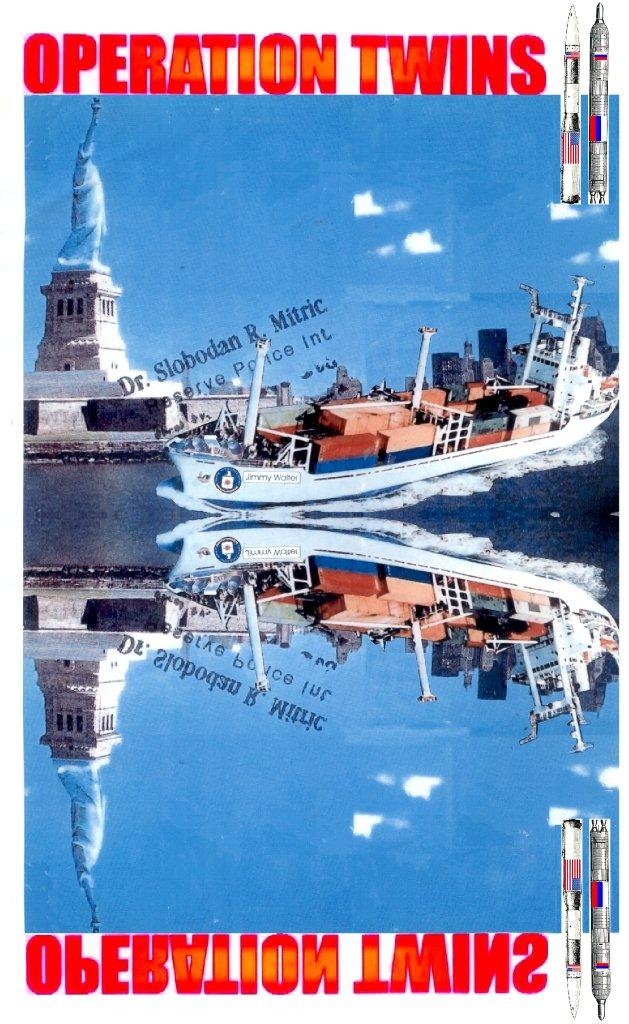 To Those Who Continue to Play Dumb –
Dedication by the Author . . . 4

III. The Invisible War Between
The “Secret Services” Of America and Russia
Summary of Operation Twins II by Slobodan Mitric . . .  20

4. Two Letters by Milorad Markovich dated 1986 and 1987 on the
Counter-Intelligence and Anti-Terrorist Work by Slobodan Mitric  . . .  57

8. Verdict of the District Court in The Hague, dated May 22, 1986
Forbidding the Dutch Government to Extradite Mitric to Yugoslavia . . .  66

Photo of Slobodan Mitric with Paul Wilking with caption

About the Mystery of Saddam Hussein’s

From A Letter by Slobodan Mitric to His Publisher from March 1, 2008

The collage on  the front page of Operation Twins II that I sent you shows the atomic bomb of the CIA that back in 2003 CIA Director Turner and the American Secretary of State Colin Powell  showed to the world in order to ‘prove’ that Saddam Hussein supposedly had weapons of mass destruction in Iraq. In reality, however, these were photos taken by "top agents" of the CIA ...

And as everyone in the world knows, based on this "evidence"  Iraq was bombed flat,  and these  weapons were never found. This was because the CIA had recovered them from Iraq and - in the same manner that they were smuggled into Iraq (by boats) - hid them in underwater forts, as shown already in the preview chapter of Operation Twins II available on internet since 2005…
The entire second part of Operation Twins deals with the "atomic bombs of Turner and Powell"
As I told you at that time, that front page shows the CIA atom bomb installation on the boat (which is owned by an Egyptian from Alexandria, who has nothing to do with this smuggling - this picture was chosen simply because I found the boat was beautiful), that is why I placed the stamp of the CIA under the atom bomb installation on that boat.
First, Saddam had no weapon of mass destruction on the basis of which he could be charged, which is why the CIA  decided to show such an atom bomb installation that  was  mobile due to the fact that it  could be moved about by train or trucks. This was a good idea of  the CIA, but also very bad, because in this way terrorists were given the idea that you could move an atom bomb installation about via mobile means, such a mobile transportation method is for example a boat.
This joke by the CIA can be hallmarked as the stamp: shipment back to sender.
Through this Operation Twins II collage, I wanted to show the world that we should not joke around with such dead serious matters.
And do realize that the CIA will have to justify why they have shown their own atom bomb installation in public thereby demonstrating  how small nuclear factories can be moved around.
This is the highest form of idiocy.
Conclusion: This atom bomb installation on the front page of Operation Twins II is a photo of the CIA nuclear installation that supposedly Saddam Hussein possessed…
Greetings,
Slobodan

P.S.
The CIA was aware of all these plans in 1982 because they were able to lay their hands on Operation Twins. I am slowly beginning to wonder: were these agents who told me all that in detail also not sent to me by the CIA and MOSSAD in order to afterwards  prepare their dirty wars, which are now already taking place? If I work things out well, it would not be surprised if that were indeed the case.
Anyway, it is only in the United States and nowhere else that an answer can be given to all these questions ...
Greetings
Slobodan